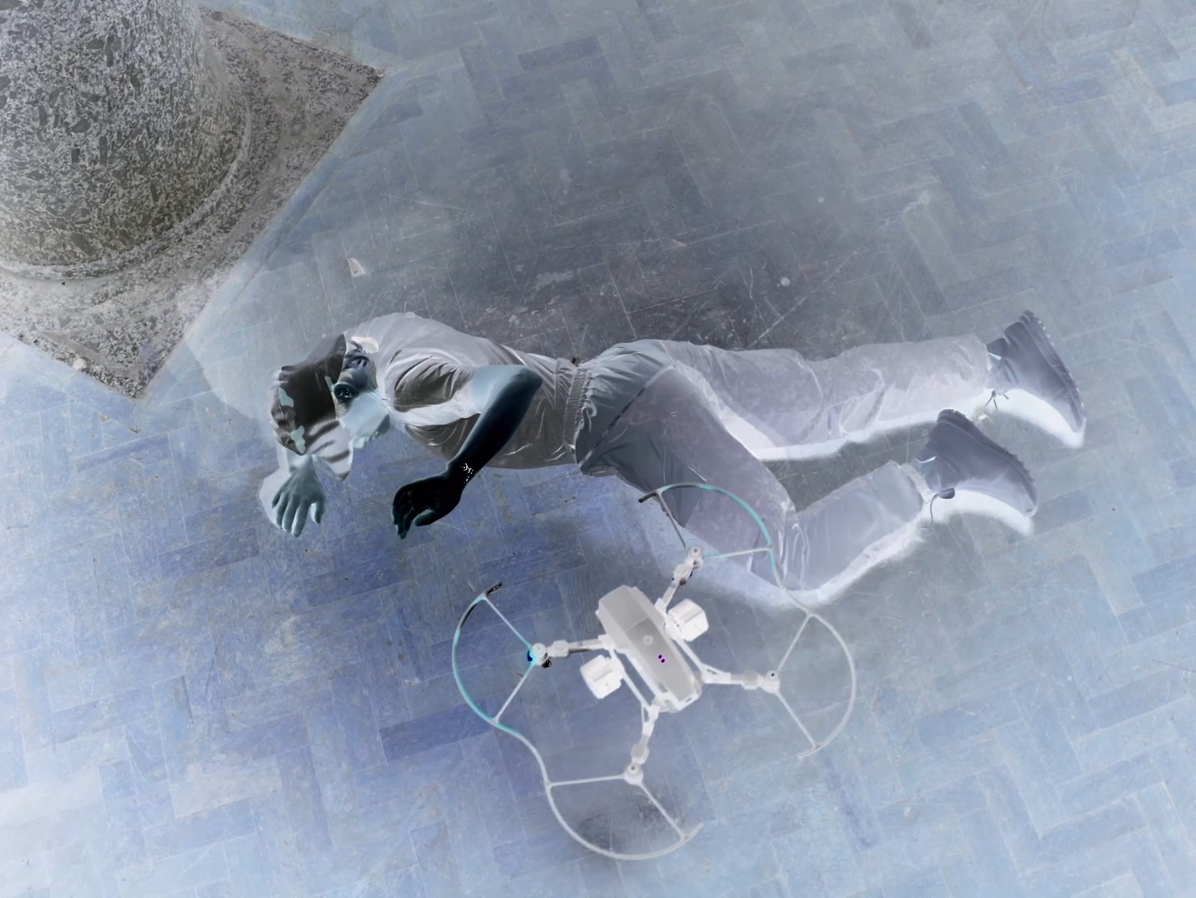 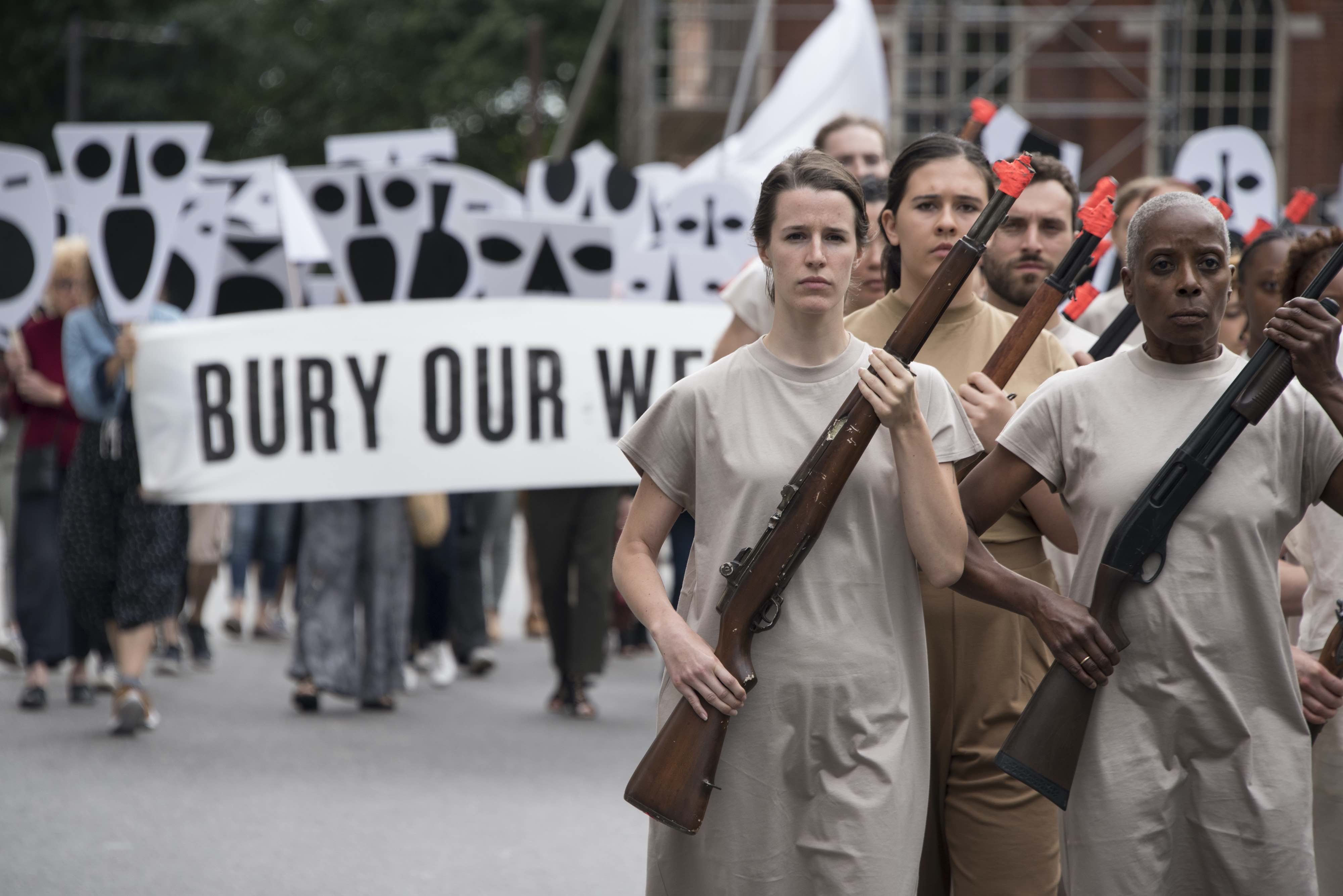 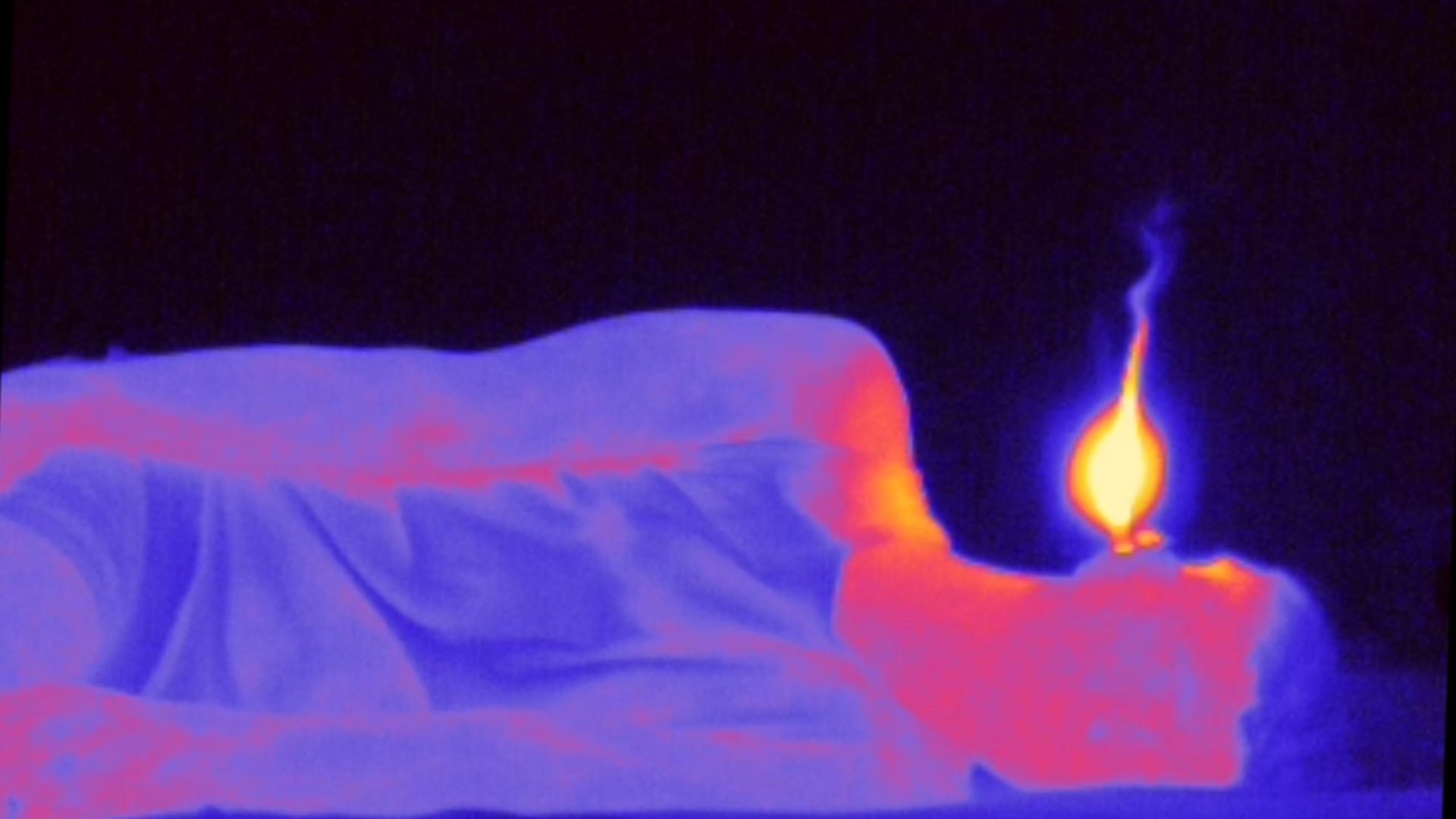 In Yael Bartana’s dialogue-free ’The Undertaker’, a group of people perform a graceful, choreographed ritual and bury their weapons in a pacifist gesture, headed by an androgynous figure dressed in black. Etel Adnan’s poem ‘The Arab Apocalypse’ from 1989 describes a future world in a state of emergency and forms the suggestive science fiction basis for Sophia Al-Maria’s performative video work ‘Beast Type Song’, which confronts the colonial violence of the past. And ‘Untitled Sequence of Gaps’ is Vika Kirchenbauer’s personal examination of trauma-induced amnesia, visualised in ultraviolet and infrared – the wavelengths that lie just outside the visible spectrum.

Yael Bartana's dialogue-free and graceful 'The Undertaker' is a performative ceremony. A group of people dressed in white robes perform a choreographed ritual, led by an androgynous figure dressed in black, who leads them through an American metropolis and on to a cemetery where they bury their weapons in a pacifist gesture, but do so with power, pride and a will to resist. As they part with their machines, the members of the enigmatic group create a monument to life and the living, at the same time as they establish a connection to the phantoms of the past. On the edges of the cemetery, soldiers in archaic uniforms look on, like museum relics from an imperialist past, which is being kept at a distance. 'The Undertaker' is both an independent video work and a documentation of Bartana's performance 'Bury our weapons, not our bodies!', created in connection with a recent exhibition at the Philadelphia Museum of Art, which confronts systemic violence and historical oppression through what Bartana calls a historical pre-enactment.

Etel Adnan's poem 'The Arab Apocalypse' from 1989 describes a future world in a state of emergency. The poem is the suggestive science fiction backdrop of Sophia Al-Maria's performative video work 'Beast Type Song', which is set in the abandoned space that previously housed Saint Martin's School of Art in London. With the participation of the performers and artists Yumna Marwan, Elizabeth Peace and boychild, as well as Al-Maria herself, the work draws on both the personal experience they all had as children and bearers of a colonial heritage, and on speculative narratives that are wrenching themselves free from colonial violence and historic repression. Where words are not enough, a new language comes into play. Bodies in motion, music and graphic abstractions are semantic signs in a revisionist project, which looks for new beginnings in a break with dominant narratives and the abuses that are deeply embedded within them.

Vika Kirchenbauer's compact and conceptual video work moves beyond the spectrum of light visible to the human eye, and into ultraviolet and infrared regions in order to give the subjective experience of trauma-induced amnesia a visible form. On a dizzying scale, which stretches from astrophysical relationships to the inside of our brain, Kirchenbauer at the same time establishes a tightly packed and open universe of ideas, where the gaps in the visual and mental stream are just as significant as what is visible and spoken. The symbolic violence links the images of a witch on a midsummer bonfire together with popcorn exploding in a microwave – an invention that allowed men to be in the kitchen without looking feminine. An iconoclastic gesture, which starts with the very basis of representation in order to approach a critique of its authority and legitimacy. Memory, (in)visibility and queerness are the basic ingredients of this contemporary and tightly packed essay by an unpredictable artist.